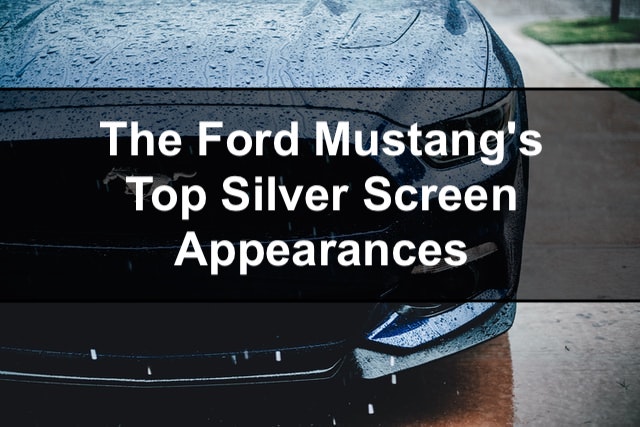 The Ford Mustang is, without a doubt, still one of the most popular cars around, even in its 57 years of existence. As recently as 2019, the Ford Mustang remained a bestseller. It sold 102,090 units, marking its fifth consecutive year as the best-selling sports coupe.

Through the years, the Ford Mustang has become a cultural icon. Not only is it prized as a reliable and powerful car, but it has also imprinted itself on the public psyche. Its cultural impact extends through music, TV, and film. Below is a handful of the top films starring the Ford Mustang’s many iterations.

An iconic movie franchise requires an iconic car. The James Bond movies are close in age to the Mustang, making them a match made in Hollywood. No need to make it look sportier, the action packed scenes speak for themselves! Many of the 27 films feature Ford vehicles, three of which star the Mustang.

The Mustang changes hands in Diamonds are Forever (1971). In this film, our protagonist Bond drives around Las Vegas with a 1971 Ford Mustang Mach 1.

With its 10-minute, 53-second car chase, Bullitt had one of the most iconic movie cars in history. Steve McQueen expertly maneuvered a 1968 Mustang GT Fastback in Highland Green.

To celebrate the movie’s 50th anniversary, Ford manufactured a limited-edition Mustang Bullitt. It was a modern recreation of the iconic car used in the original film. The car retained such iconic status that the one used in the movie sold at a whopping $3.74 million. This happened at a 2020 auction to an anonymous buyer.

Gone in 60 Seconds is another film with iconic car chases. It had a 40-minute car chase, one of the longest in film history. Many reports say over a hundred cars got destroyed during production.

Both films feature Eleanor, the star car of the film’s heist. In the 1974 film, Eleanor was a 1971 Ford Mustang Sportsroof, which endured several stunts. The year 2000 saw a remake of the legendary movie. It starred Nicholas Cage, who jumped at the opportunity to drive a 1967 Shelby GT500.

A Disney princess movie might not be something you expect on this list. But, 2001’s The Princess Diaries prominently features a 1966 Mustang Coupe.

Sixteen-year-old Mia Thermopolis drives a battered Ford Mustang for most of the film. Unlike other muscle car action movies, the Mustang in this film exudes a quirky charm. It might not be the most fashionable car for the time, but it serves as the perfect setting for many plot points.

The John Wick series features one of the most memorable movie assassins of the decade. Despite the titular character’s stoic and hardened facade, his vehicle speaks for itself. The 1969 Mustang Mach 1, a powerful and elegant machine, is an excellent match for the character.

Wick embarks on a quest to retrieve the car, which got stolen alongside the death of his beloved dog. With his reputation as an expert assassin, the chop shop that receives his car refuses to strip it.

With the Ford Mustang’s rich history, you can see why it is such a star on the silver screen. You can even experience its magic once you get behind its wheels.

Plus, it has evolved so much over the years, adapting to the needs and shifts of the times. Its latest iteration, the Mustang Mach-E, is an environmentally-friendly electric vehicle. It’s the brand’s answer to the urgent calls for helping save Mother Earth.

So, if you want to give in to the pull of this mighty car, you can purchase a brand-new Ford Mustang from a trusted dealer. You won’t regret it.