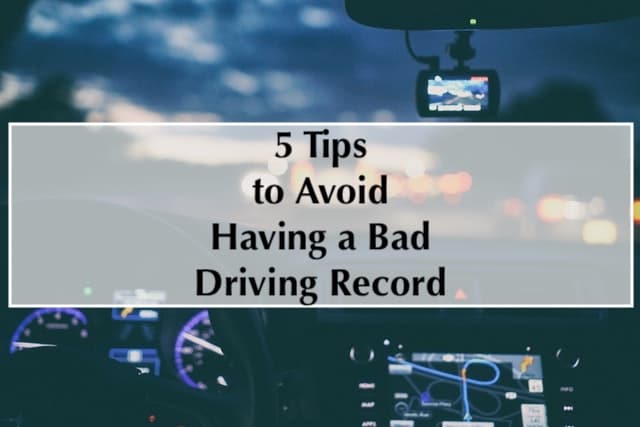 5 Tips to Avoid Having a Bad Driving Record

There are a few things you can do to avoid having a bad driving record and prevent disastrous consequences. When you have a bad driving record, your insurance rates go up, you could lose your license, and you could even have your car impounded! All things considered, actively trying to be a good driver will make your life a LOT easier.

In order to keep your driving record clean, there are five tips you can put into action right now. Take a look at these ways to help you keep a good record, and keep yourself behind the wheel!

Driving the speed limit will not only keep you safe on the road, and your driving record impeccable, but you can also avoid those hefty speeding ticket fines! The more speeding violations you have in a shorter period of time, the more damage you can do to your life.

Not only could you lose your license with repeated speeding tickets, but you could also raise insurance costs! You would have to pay high-risk insurance because of your bad driving habits. Avoid the hassle, the wasted money, and the all around danger of driving too fast by sticking to the posted speed limits at all times!

Driving Under the Influence

One of the most common reasons people have a bad driving record is because they chose to get behind the wheel when they should not. Driving under the influence is not only incredibly dangerous for you and everyone else on the road, but the consequences of that choice could haunt your life forever.

Driving under the influence of many substances could lead to all of the following:

There are of course the unseen consequences of endangering others. The guilt and shame of getting a DUI could be overwhelming.

Sometimes accidents happen. Life is messy and sometimes it can’t be avoided. However, if you’re a bad driver and are the cause of several accidents during your time on the road, you could lose your driver’s license. Not only that, but you could have severe injuries, hurt others, and total your car. Avoid accidents in any way you can for your safety and your driving record!

Driving recklessly can definitely hurt your driving record. Not only could you get moving violations for not signaling lane changes, or for using your cell phone while driving, but you can also really hurt yourself and others. Reckless driving is one of the most common causes for tickets. As well as one of the most common reasons why your driving record is BAD!

Trying to avoid consequences never works out well. Avoid having a bad driving record by accepting your consequences for previous actions. Pay your speeding tickets, don’t try to drive without a license, and learn from your driving mistakes.

If you get a speeding ticket and pay the fine, it could be off your record in a few months. But if you don’t, it can damage your record even more. Therefore, you should accept the consequences of your actions and learn from them!

Avoid Having a Bad Driving Record for a Better Life!

Avoid having a bad driving record by following these five tips. Not only will it make you a safer driver, but it will also improve your life! You won’t have fines to pay, your insurance rates will be more affordable, you won’t hurt your credit score, and you’ll be safe. All in all, if you keep your driving record clean, your life and time on the road will be so much better!