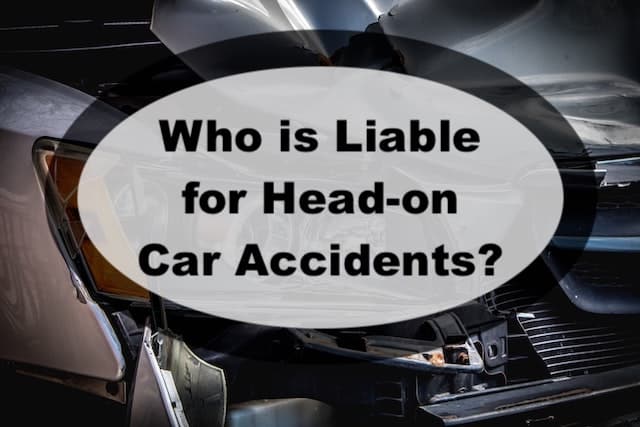 Who is Liable for Head-on Car Accidents?

Head-on car accidents are not as prevalent as other types of car crashes. However, they are very deadly and cause very severe injuries. These crashes happen when one driver collides with another vehicle’s front end. These crashes usually happen when a driver is driving on the wrong way. That driver is usually the party that is held liable for the crash because if he or she had not been driving in the wrong lane, the accident could have been avoided.

However, there is a possibility that the crash was brought on by other underlying issues. Therefore, it is advisable to get a lawyer who can interview witnesses, examine the police report, and get any additional information to determine liability in a head-on car accident.

Causes of this Type of Collision

Some causes of this type of collision include reduced visibility, road rage, distracted driving, failure to read road signs, poor road conditions, and driving under the influence. Furthermore, being one of the primary causes of collisions, excessive speed can also play a role in analyzing the seriousness of the injuries of victims as well as the total cost of the damage.

The faster a person is driving the car, the more severe the injuries and damages will be. Some of the common injuries that victims have sustained in road collisions include broken bones, internal bleeding, and even death.

Accidents involving vehicles colliding head-on can be caused by a variety of factors, including the following:

Determining the Liability of the Head-On Accident

Every driver on the road has a statutory obligation to exercise a level of care that is consistent with the circumstances. Finding out which driver failed to exercise reasonable care when approaching other drivers on the road helps decide who is at fault in a head-on collision. This carelessness frequently manifests as a traffic law infraction, like a lane change that is not permitted.

After head-on car accidents, the defense attorney for you, the person in charge of the other party, and the insurance provider might all cooperate to determine who was negligent and who was at fault, as well as who should be held financially liable. Each side may look to the following factors to decide who is responsible when two cars hit head-on:

Fault Determination in a Head-on Collision

The legislation about carelessness is applied to every type of automobile accident, including head-on collisions, in order to identify who is at fault for the accident. In order to avoid hurting or damaging someone else or their property, a motorist must operate a motor vehicle with appropriate care. This is known as negligence.

It is necessary for a person to be able to focus on the road in order for them to be able to drive responsibly also on the road signs, avoid entering the lane of oncoming traffic, ensure the proper car maintenance, and drive in the correct manner. It is usually simple to pinpoint who is at fault for a car accident when a motorist does not operate their vehicle with reasonable care.

Evidence to Prove Liability in a Head-On Collision

Following an automobile accident, you can take certain actions to support your claim. No matter if you’re the driver or a passenger, head-on incidents have a higher likelihood of leaving you seriously hurt. Injured people should receive medical attention right away. Send emergency services to the location as soon as you can by dialing 911 you can.

After getting prompt medical assistance, you should begin collecting facts as soon as you are able to address any legal or insurance concerns that may come up. Obtain a copy of the accident-related police report and all relevant medical documents.

After that, speak with an accomplished personal injury attorney. Get an attorney engaged as soon as you can, even if your insurance company is handling the claim, especially if it involves a sizable payout or doubts regarding the fault. Additional evidence will be gathered, specialists will be hired, and your lawyer will try to calculate the amount of damages you should receive.

Actions to Take After Being Involved in a Collision

You should document every accident-related receipt and paperwork that you receive, including your medical records.

Get a Copy of the Police Report

A report will be filed with the local authorities once they arrive at the scene of the collision. You should get a copy of the police report, which you can use as evidence to strengthen your claim.

Speak with a Lawyer

You should speak with a legal representative who can help you explore your legal options and advise you before you sign anything. The lawyer will also help you to calculate your damages by putting into consideration your medical costs, childcare costs, rehabilitative costs, lost work benefits, property damage, and lost income after a car accident.

The legal expert may also factor in your pain and suffering as well as your diminished earning capacity. A lawyer can also identify the party who is at fault by establishing whether the party was negligent. Some of the elements that show the other party was negligent include; if the driver had a duty of care, whether they breached that duty, whether their negligent actions caused the accident and if you incurred losses from the crash.

In conclusion, the party that is held liable in head-on car accidents is the driver who was driving the wrong way. This is because if the driver was not driving in the wrong lane, the accident could have been avoided. It is advised that you seek the advice of a lawyer who can utilize the knowledge and skills at their disposal to carry out exhaustive research and establish who the responsible party is.