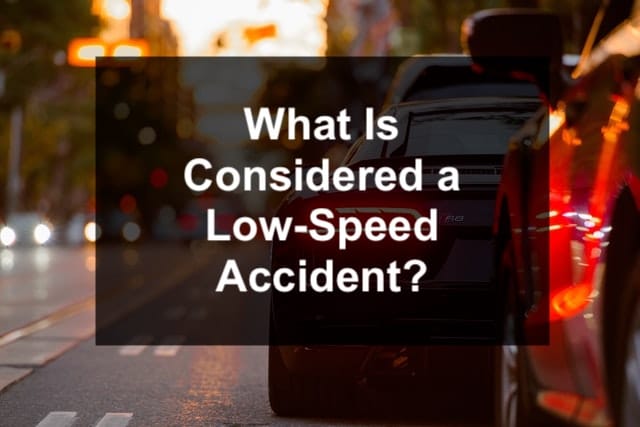 What Is Considered a Low-Speed Accident?

Trying to figure out what a low-speed accident is? Check out this helpful article.

Unfortunately, accidents can be part of our lives, no matter how hard we try to avoid them. Some accidents can have a serious impact on our physical health, mental wellbeing, and financial stability. If you get into an accident, it is important to know that you may be entitled to compensation.

Even the most minor car accidents where only the vehicle gets damaged can make you eligible for compensation. Auto accident lawyers can help you better understand the process and uncover if you are entitled to damages. Knowing how to handle the process and what to ask for when it comes to compensation can significantly increase financial claims.

Since people may go through many accidents during their lives, they may believe that some minor collisions are not serious. The victim might move on without filing a claim, but this should not be the case. No matter the damage, an accident is something that you should be compensated for.

Low-speed accidents can entitle us to financial claims, but since there are less severe injuries and little property damage, many people pay out of pocket for expenses. Let’s see exactly what is considered a low-speed accident and what can be done about it to protect you and your driving record.

The Speed Resulting in a Low-Speed Accident

Statistics show that crashes at the speed of 15 mph or lower are rarely dangerous, even for pedestrians. A collision between two vehicles at that speed can be considered a low-speed accident.

Damage to the Car

A low-speed accident can also be decided based on the car’s damage. Cars are built to withstand crashes, but some evidence will remain on the vehicle after an accident. When the speed is not high, there might be dents, missing paint, or scratches. Low-quality cars can sustain a bit more damage. They can see broken side mirrors, tail lights, headlights, or windshields.

Low-speed accidents don’t just damage the vehicle. Occupants or pedestrians can also be injured. Luckily, the damage people suffer is not major in most cases. Even though the speed is not high, sudden forces can harm your body. Whiplash is the most common issue caused by the sudden jolting of the head back and forth.

Whiplash can have different effects on our health, and in some situations, we will need medical attention. The most common symptoms are neck pain, memory loss, tiredness, headaches, shoulder pain, back pain, and arm numbness.

A low-speed accident can also lead to traumatic brain injuries like concussions or skull fractures. You can also expect soft tissue injuries like scratches, bruises, strains, and sprains.

Front-End Alignment: Why You Need To Get It Done?

Important Inspections You Must Do on a Bucket Truck

The Evolution of the Automotive Tire Industry