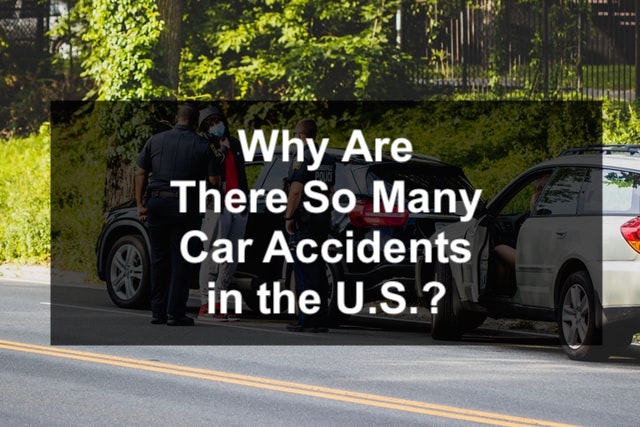 Why Are There So Many Car Accidents in the US?

Ever wondered why there are so many car accidents in the U.S.? Per capita traffic deaths in the United States are the highest in the industrialized world.

In the 1970s, U.S. traffic fatalities were lower than those of similarly situated countries. Now, the U.S. is leading in those figures. By 2012, total traffic fatalities per year significantly decreased, likely due to improvements in vehicle technology, emergency response, and healthcare. Despite accidents still occurring around the nation, improved safety features, including airbags and seatbelts, reduce the likelihood of fatality after an accident. Quicker immediate care via ambulance or medical evacuation post-accident also helps to save lives.

But Why Are There Still So Many Accidents?

The analysis does not stop there. Although there are several reasons for the momentary changes in traffic fatalities, there are also long-standing regulatory policies that play into these statistics. For example, laws that govern seatbelt use and other safety-related policies have an impact.

To sustain a long-term reduction of traffic fatality rates, the United States must take an approach to road safety much like our counterparts. For example, the Netherlands is taking a proactive approach to vehicle safety. The Netherlands prioritizes pedestrian safety with its roadway designs. Proactively designed roads reduce the number of accidents from the onset rather than putting safety measures—like speed bumps—in place as a reaction to increased accidents or fatalities.

Additionally, communities in similarly situated countries have a compact design. This reduces travel time which ultimately reduces traffic fatalities. Conversely, U.S. communities are often designed in such a way that vehicle dependence is inevitable.  Most communities have sprawling designs that require a lengthier commute than our counterparts.

The Future of U.S. Roadways

In 2015, the Federal Highway Administration (FHWA) announced plans to encourage road safety. FHWA pitched its “complete streets” design model to Congress as a way to make all road users feel safe. The design model purportedly “prioritize[s] safety, comfort, and connectivity to destinations” for everyone on the road, whether driver or pedestrian. It may a good option to stop so many car accidents in the U.S.

In states like Florida, implementation of this plan has long been underway. With the state’s population growing by about 1,000 people per day, the policy’s implementation has proven necessary. Pedestrian crosswalks have features to alert drivers that there is a pedestrian crossing the road. Roundabouts are strategically placed near or within residential neighborhoods, forcing drivers to slow their speeds. Sidewalks are being widened, while roadways are being narrowed and bike lanes are being installed in more locations than ever.

Where Do We Go from Here?

According to Wendy Doyle-Palumbo, while it is clear that certain areas of the U.S. are ahead of the curve in road safety, the statistics backing up the benefit of policies like “complete streets” clearly have a long way to go. Enacting policies like that mentioned above is crucial to reducing the number of lives unnecessarily lost on the road each year.

Prioritizing the switch from traditional roadways to user-friendly roadways can shift the entire narrative of U.S. vehicle fatality rates.  And stop so many car accidents in the U.S. from happening before they start!