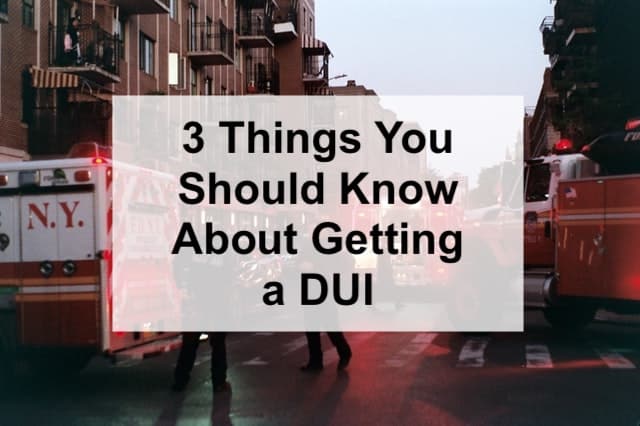 3 Things You Should Know About Getting a DUI

Being charged with and getting a DUI is something that happens much more frequently than anyone might imagine. This might be related to the fact that drunk driving ranks among the leading causes of accident fatalities in the entire country. Law enforcement officials, aware of these grim statistics, place special emphasis on pursuing DUI cases.

If you are in this situation, you may feel that you are being unjustly charged or that the charges may not be warranted. However, fighting these charges on your own may not give you the best results. Parikh Law, P.A. recommends you use legal representation from an experienced DUI attorney to fight the charges and avoid the consequences that a DUI can bring to your life.

Three Things to Know About Getting a DUI

If you are facing a DUI charge, here are three important things you need to know about a DUI.

The Consequences Can Be with You for A Long Time

When you think about being charged with a DUI, you may imagine a person that is driving in such a way to make it obvious that they are under the influence. You may let your imagination run a little further and imagine someone losing their life due to an accident caused by a drunk driver.

Both scenarios are quite realistic, however, being charged with a DUI does not necessarily mean you have killed someone or that you have been driving drunk. You may be asked to pull over simply because the officer suspects that you may have alcohol in your system.

Depending on how much alcohol is revealed you have in your blood and how many prior DUI convictions are on your record, you may realize that the effects of getting a DUI are tough to deal with and could become a permanent fixture in your life.

You may start by losing your driver’s license which can be for an extended period of time or permanently if you have prior DUIs. In some states, you also risk facing a felony charge when driving under the influence is involved.

Once you are charged, you may start noticing that life has turned into quite a complicated experience. All of a sudden you may find it hard to keep or get a job, you may not easily find housing, your social relationships might suffer, you may lose visiting privileges with your children if you are divorced, or you may have trouble getting accepted to an educational institution, just to name a few consequences of a DUI.

Repeated encounters with the law are never a good idea. Every subsequent time you are charged a DUI you will face steeper penalties. Although jail time for first offenders is not the norm, with more than one charge you may face up to five years in jail and the permanent loss of your license and driving privileges. The worst-case scenario is when you get charged with a felony, particularly if someone died or got injured.

After multiple DUI charges, consequences will become more severe, and besides going to jail, you may have to pay hefty fines and your car may be impounded.

Some people think that the best way to avoid a driving under the influcence charge is by refusing to take a field sobriety test. However, although the law allows you to refuse the test, you will still have your license revoked for 10 days for refusing.

Penalties for consecutive DUI convictions become quite serious. As an example, a fourth DUI conviction is classified as a third-degree felony, punishable by up to 5 years in state prison and a $5,000 fine. You may also face your vehicle being impounded, having to take drug and alcohol education or rehabilitation, and several hours of community service.

You Need the Help of an Experienced Attorney

Considering everything that might be at stake when you get a DUI, it is imperative to have all the help you can get to fight this charge. The best help comes from an experienced attorney. You want someone who is fully familiar with the law, is prepared to defend you in court and will fight to avoid the consequences of a DUI.

Your lawyer will be on your side, fighting to make every effort for you to end with the best possible future. You have enough to worry about without needing to become a legal expert. That is where a DUI attorney and their expertise come in.

Consequences of Getting a DUI are Awful

Unfortunately, sometimes people make terrible decisions. But now you know what to do if someone you know gets a DUI. Stay safe and don’t drink and drive!

What Are the Most Common Vehicle Repairs?

What to Take into Consideration When Choosing a Car Accident Attorney

What Happens if a CDL Driver Gets Into a Truck Accident

How Car Brakes Operate and How to Spot a Bad Brake

Trending Posts
Most Popular Posts
Reviews
What Are the Most Common Vehicle Repairs? 0 comments
5 Tips for Choosing the Best Junkyard for Your Car  0 comments
Things You Need to Know Before Owning a Car 0 comments
3 Things You Should Know About Getting a DUI 0 comments
What Is Considered a Low-Speed Accident? 0 comments
5 Best Trailer Brake Controllers In 2022 6 comments
4 Best Body Fillers In 2022 5 comments
Best RV Wax For Fiberglass (Updated 2022) 3 comments
3 Best Car Wash Soaps For Black Cars In 2022 2 comments
How to Hook Up a Second Battery for Car Audio 1 comments
Nissan Sentra 2022 Review October 28, 2021
Chevy Malibu 2021 Review October 14, 2021
3 Best Clear Coat Spray Paints In 2022 October 7, 2021
4 Best Body Fillers In 2022 September 27, 2021
3 Best Headliner Adhesives In 2022 September 26, 2021