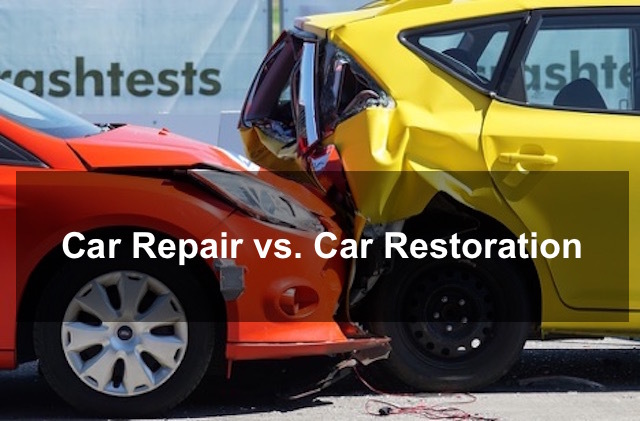 Car Repair vs. Car Restoration: What Are They and When Should You Do Them?

It’s nasty business getting involved in a car accident. Nobody wants to be that careless or that unlucky. But sometimes, it just happens, not as a result of your own doing, but rather as the result of the mistakes of another.

A vehicular accident is no joke. And while it’s shameful to have to say it, it’s also necessary as a gentle reminder because, with the frequency of vehicular accidents happening on a yearly basis, one might think that this fact has sunken into the minds of some irresponsible drivers.

It’s an unnecessary expense to have to handle a car accident. And this cost will greatly increase in price once lives are involved, especially the lives of innocent pedestrians, according to Blumenshine Law.

Now, let’s leave the litigating to the litigators. Let’s move on to what you all came here to read: repairing versus restoring your car. While both may seem to have the same goal in mind, to bring your car back to its original functional and roadworthy state, there are key differences between these similar words. Let’s take a look at some of them here.

What type of damage is addressed?

The most defining difference between a repair and restoration comes in the form of what type of damage they seek to undo. Repairs are performed for any damage to the visual, cosmetic aspect of the vehicle. Things such as dents, chips, and scratched paint are all examples of cosmetic damage. They present no real damage to the car’s ability to function, nor do they have a significant impact on safety.

Don’t be fooled though, a dent-free car is undoubtedly going to be more valuable than one that’s full of dents and scratches. A car that’s properly pressure washed even more so, which is why repairs are still essential among car owners.

On the other hand, restorations address the damage done to parts that are vital to the car’s ability to function. Parts such as the engine, suspension system, and frame are all real threats to driver safety if damaged.

What tools are used to help the vehicle become roadworthy?

As you may have guessed, a car restoration requires specialized tools. These tools come in the form of lasers and ultrasound scanners. This is because precision is of the utmost importance if one intends to straighten vehicle parts to their original state. This also means that your car also performs in the same way it used to, if not better than, before the accident.

This decision depends entirely on the parts of your car that were damaged in the accident. And, of course, there isn’t a better point of reference other than a thorough car inspection by a qualified mechanic.

As a general rule, if you’re involved in any car accident, you’re definitely going to need car repairs, whether it’s to fix a few dents or to refresh your car paint, all the way to the ever-important clear coat.

However, in any case, you’re still going to need a thorough inspection of your car so that you’re able to detect any damage that cannot be easily seen. You can think of this as a medical check-up of sorts. You need to know what exactly is wrong with your body. This is for you to be able to determine to what extent do you need treatment. The same holds true for your car after an accident. After all, you don’t want hidden issues to cause another accident in the future.

How to Pick Out the Right Lift Kit ‏