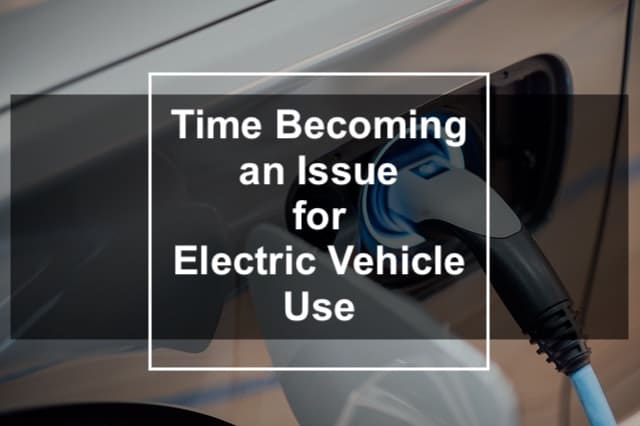 Time Becoming an Issue for Electric Vehicle Use

A huge spike in the price of petrol is likely to be yet another prompt for motorists to seriously consider driving and / or owning an electric vehicle (EV) as their next car, or possibly the one after that. The combination of societal pressure, better designs and lower cost is likely to produce a tipping point when choosing an EV becomes more likely than traditional cars, and even vans.

As MOT testing is quickly adopting new technologies and methods to ensure these vehicles’ safety, the UK’s infrastructure takes one more step to accommodating what is sure to be the future.

However, some organizations are beginning to worry that progress is not coming quickly enough; time is becoming an issue for the wide variety of changes which will be needed to make this transition a success.

In the spring of 2021, the British government announced that the sale of new petrol and diesel powered vehicles would be banned after 2030. This ambitious decision was welcomed at the time, when the UK was presiding over the United Nations’ COP 26 process on slowing down climate change. Electric vehicle use will definitely be on the rise.

As part of the press package, it was envisaged that British car manufacturing would step up its efforts to produce the necessary technology for electric vehicles, thus boosting its manufacturing sector as part of a post Brexit “leveling up” agenda.

While the announcements were widely welcomed, the fact is that they came during a time of coronavirus pandemic, with resultant curbs on society and the economy. One year later, in 2022, and the landscape has changed somewhat. The COP procedure is being hosted by another country, and the focus in the UK is very much on economic recovery, as quickly as possible.

Competition for Electric Vehicle Use

As other countries around the world also emerge from the pandemic, competition for resources and markets is resulting in rising inflation, interest rates and a plea for wage restraint from major banking figures.

As these growing pains play out, however, the clock is ticking. The fact is that 2030 is only eight years away; a maximum of two general elections, and the blink of an eye for those planning long term economic strategies at national, regional and local level.

Groups representing those most affected by the deadline, such as motoring and disability organizations, are rightly pointing out that a lot still needs to be done, and the quicker the better; otherwise, large sections of society are likely to be adversely affected by changes imposed on them in quite a short space of time.

As of December 2021, the percentage of vehicles on UK roads which were EVs was about 2%. By 2030, this is expected to rise to almost 20%. As traditionally powered vehicles come to the end of their roadworthy lives as per their annual MOT test, it will become harder and more expensive to acquire used petrol and diesel vehicles, at least for the average motorist.

Inevitably, then, demand for electric vehicles will increase year on year, for an ever wider part of society; this will include demographic groups unlikely to be early adopters of EV technology and associated infrastructure.

Already in 2022, there are calls for improvements in many aspects of EV take up. In particular, the issue of charging points is seen as one which will be possibly its most vital. While the lack of charging points, combined with battery range, has long been an issue for those willing to buy or rent electric, facilities at charging points have come more into focus.

Specifically, disability charities and organizations are flagging up the issue of accessibility. Difficulties experienced by Motability drivers include:

On 2021 figures, 10% of all UK vehicles purchased were by or on behalf of a driver with particular requirements. Research carried out by a major motoring organization predicted that, by 2035, there will be 2.7 such vehicles on British roads; with approximately half of these requiring charging at public stations.

As trusted safety testers, checkmot.com want to see these vehicles and drivers adequately catered for, before demand for EVs really starts to heat up in and around 2030.

As a freelance writer, I have been creating content and writing blogs for over seven years! Not only do I love writing about cars, but I also have experience in many other fields. I have been a guest writer on many popular blogs, as well as ghostwritten novels. When I’m not writing, you can find me with my family, reading a book, or working on an art project.