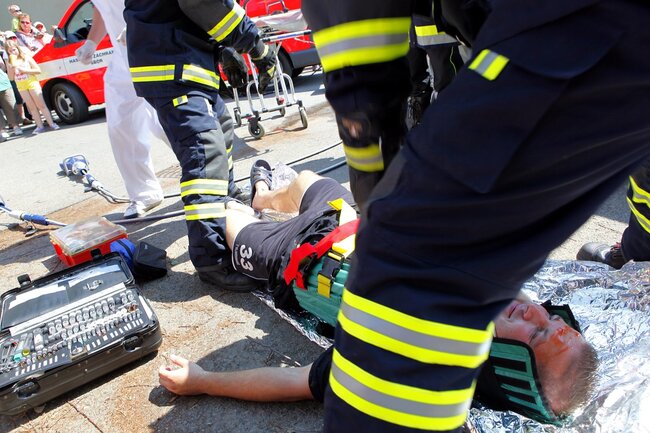 The penultimate day of spring in 1896 remains in automotive history thanks to the first officially recorded traffic accident. It involved an electric car and a bicycle in New York City. Evelyn Thomas, who was driving the bike, got off with a broken leg. We decided to remember the most unusual and ridiculous accidents that left everyone alive and sometimes even happy.

On October 9, 1992, a meteorite flew over several U.S. states at once. Sixteen video cameras recorded a bright streak in the sky, but the space object did not burn up completely in the atmosphere but crashed into a bright red Chevrolet Malibu parked in the parking lot of the small town of Pixil in New York State.

At the time of the collision, the celestial body was moving at 264 kilometers per hour, weighed 12 kilograms, and had a diameter of about 30 centimeters. Later, scientists also determined the age of the rock – it was somewhere around 4.4 billion years old.

Until now, this event is the only confirmed case of a meteorite hitting a car. Michelle Knapp, the owner of the car, was the happiest of all. Just the day before she bought a Chevrolet Malibu for 400 dollars, and after she was able to sell the car with a huge hole in the trunk for 10 thousand dollars. Now this “meteorite car” is shown in museums around the world.

The most expensive accident

In December 2011, 14 cars collided on one of the highways of Japan. It would seem that there is nothing unusual in this accident, but if we look at the list of cars – participants of the accident, we see eight Ferrari, one Lamborghini Diablo, Nissan GT-R, and three Mercedes-Benz.

At the end of the list is a modest Toyota Prius, whose contribution to the most expensive accident in the world was the most negligible.

The culprit in the car accident was found to be a 60-year-old man who failed to control his Ferrari in rainy weather. He was traveling in a column of owners of expensive sports cars when his car skidded at about 150 km/h and started to bounce from one car to another.

He finished his 400-meter long uncontrolled “flight” on the oncoming carriageway, where he caught two more Mercedes cars. In the accident seriously damaged only cars, and the culprit was written out a fine of one hundred thousand yen (about 50 thousand rubles). Another thing is that the cost of just one wrecked Ferrari F-360 is more than 230 thousand dollars.

In 2010, an elderly Washington resident was prosecuted for not having car insurance, so he went to the insurance company to get a new policy. While parking, the driver mixed up the brake and gas pedal pedals and drove his 1996 Chrysler Cirrus right into the door of the office he was supposed to be walking into.

The door next door to the insurance company’s office belonged to the licensing department, where American citizens are issued and renewed driver’s licenses. Because of the damage, it had to be closed for a couple of days as well.

In January 2013, another elderly man mixed up the pedals and hit the gas instead of the brake. This mistake caused his Honda Fit to fly into the door of a pizza parlor in Lincoln, S.C. Due to the compact size of the hatchback, severe damage was avoided, and fortunately, no one was hurt. But the most interesting thing happened next.

While the frightened visitors were calling 911, the unperturbed grandfather, without leaving the car, began to order. The waiter behind the counter was surprised to say that the driver was not even embarrassed by what had happened. Later, the old motorist was taken to a hospital, but even there, the doctors said he was completely healthy and sane.

Was there a donkey?

In the same 2013 Internet users noticed on the panoramic pictures of Google Maps in Botswana a dead donkey lying on the way of Google Mobile with cameras. If you rewind the panoramic images a little bit along the road, it turns out that the same donkey was standing on the side of the road a few meters ago.

A few days later, the search giant denied the allegations, and as evidence, it published pictures that were not included in the Street View service. They showed the hood of the Google mobile and the statement: the car drove up to the donkey lying on the road, after which it got up and walked along the side of the road.

For a few days in connection with this situation, we were reminded of Photoshop, after which the fuss died down.

In 2014, on the grounds of the National Chevrolet Corvette Museum in Bowling Green, Kentucky (USA), there was a technical accident: a soil collapse. The ground fell out from under the wheels of eight supercars.

The cars made between 1962 and 2009 had crashed down into the crater, which was about 12 meters in diameter and nine meters deep. Among them were millionth and a million and a half Corvette cars, presented to the museum by General Motors. The incident happened at 5:45 a.m., so no one was on the show grounds.

Credit must be given to the cleverness of the museum management, who decided to turn the event into a new exhibition – this exhibit at the museum opened two years later. Visitors are shown the incident, which was filmed by surveillance cameras, told about the nature of the ground failures, as well as demonstrated the entire process of restoring the supercars.

I think I broke a nail

Lee Redmond knew many residents of the American city of Salt Lake City because the length of her nails was 8.5 meters. For this measure, she was unequaled, for which the woman was included in the Guinness Book of Records. She hadn’t cut her nails since 1979, but that all changed in 2009 because of a car accident.

As a passenger in a crossover car, she was involved in an accident and then hospitalized. None of her injuries were life- or health-threatening, but her emotional state was severely traumatized: Lee Redmond broke her fingernails. The 68-year-old record-holder did not grow them back.

A large number of people gathered around the scene of the accident, who began to film on their phones how the driver was hurriedly collecting the rubber goods. A small traffic jam was formed, mainly because of the driver, who was standing directly behind the “Gazelle” and filmed the piquant moment on his DVR camera.

On August 9, 2016, on Cherepovetskaya Street in Moscow, a sewage truck burst its tanker.

Apparently, the special vehicle was on its way from a “mission”, and, unfortunately for those around it, the contents were scattered in all directions. The bus driver was the most unlucky, as the brown-colored jet hit him right through the side window. A cab and a snow-white crossover, standing next to the epicenter of the “explosion,” were also affected. There were no victims in the accident, no one applied for moral damages.

A black horse was passing through the Belarusian town of Zhlobin. It was traveling around the city in the back of an old Soviet truck, while its driver was violating several provisions of traffic rules of the Republic of Belarus.

Along the way, he was required to monitor the placement, mounting, and condition of the cargo in order to prevent it from shifting and falling. However, when starting from another traffic light, the horse still fell out of the truck.

This was a selection of the Ten Most Unusual Car Accidents. We tried to choose the best for you.  Don’t get into accidents and take care of yourself.