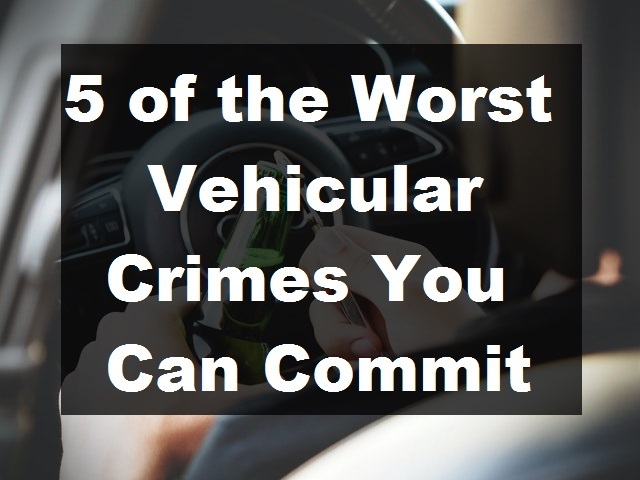 The Worst Vehicular Crimes You Can Commit

There are millions of vehicles all over the road every day, and if you drive to and from work, then yours is one of them. Hopefully, you’re one of the people who realizes that cars can weigh multiple tons, so you need to operate them very carefully every time you’re out there. That’s why traffic rules exist: to prevent injuries and deaths.

However, you should also understand there are some extremely egregious crimes that you can commit while driving. Some people do commit these crimes, but you must never do so. Refraining from them is your responsibility as a societal member.

It probably does not surprise you that DUIs are on this list. Ingesting alcohol and getting behind the wheel happens far too often, and this particular action injures many people around the country every year.

A “regular” DUI can occur if the police catch you and give you a breathalyzer. They consider it a regular DUI if your BAC is over 0.08%.

You can usually get to that level if you ingest two alcoholic beverages in an hour and then attempt to drive. You might do this at a friend’s house or a party. Generally, if you drink any more than a single alcoholic beverage at one sitting, you should automatically know that driving home is off-limits.

You might not know that there are multiple possible DUIs, but there are. The police and the court system consider it an extreme DUI if they catch you driving and you have a blood alcohol content between 0.150 and 0.199%.

Unless you’re a dedicated alcoholic, most people can’t function very well at this point. You will feel significantly impaired, and if you try to drive, you will find it genuinely challenging. You’ll reach this point if you drink approximately 3-4 alcoholic beverages in rapid succession.

If you’re alternating shots and beers, for instance, that might get you there. You’ll need to leave your car and either get someone to give you a ride, or else you can call a taxi or use the Uber app. You can come back to retrieve your vehicle later.

There is one level beyond an extreme DUI, and that is the super extreme DUI. At this point, you will have a greater than 0.20% blood alcohol level.

If you ever reach this point, driving anywhere should never enter your head. Probably there won’t be any coherent thoughts going through your head at all. If you ingest more than 5 drinks within a very short period, that will take you into this territory.

You are blackout drunk at this stage or close to it. Only if you’re an alcoholic will you be able to function with anything approaching normalcy. If you reach this stage, you’re probably going to have to pass out and sleep it off before too long. You can also expect a serious hangover when you wake up.

Driving While on Drugs

Driving after ingesting drugs is another one of the worst things you can do with a car. There are all kinds of drugs that you might consume and try to drive: crack, heroin, cocaine, magic mushrooms, MDMA, methamphetamines, and so forth.

While it’s wrong to consume any illegal drug and attempt to drive, you should also know that the police will frown on you ingesting legal drugs and driving as well. For instance, marijuana-infused edibles are legal now in several states. You can buy them at dispensaries, and some can be quite potent.

Even though they are legal, they are intoxicants, which means you have no business ingesting them and then trying to drive. You also might have a prescription for a legitimate medication, like high blood pressure meds. If you know that these impact you, you shouldn’t ever try to drive right after taking them.

Vehicular homicide is another one of the worst things you might try to do with a vehicle. Maybe you’re having a disagreement with someone, and you’re furious at them. You decide to get in your car and try to run them down.

You’re trying to use the car as a weapon, which is just like picking up a gun and attempting to shoot them. If you ever feel yourself getting close to trying something like this, you have serious anger issues, and you need to seek help.

Make sure you never engage in any of the activities we’ve mentioned.